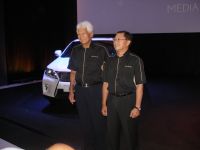 Petaling Jaya – 9 May, 2012 – Lexus Malaysia today officially introduced the improved version of the Lexus RX, a crossover vehicle that created popularity in the Large Luxury Sports Utility Vehicle (SUVs) segment. The new improved Lexus RX marks as the second Lexus model which continue to refine the ‘L-Finesse’ design philosophy by debuting the latest interpretation of the new Lexus “spindle grille” that was first seen on the all-new Lexus GS, which was launched in March 2012.

The spindle grille is part of a new design trademark of Lexus which will soon be adopted throughout the brand to strengthen the Lexus family identity between model ranges.  This bold and elegant spindle grille makes the new improved Lexus RX instantly recognizable as a Lexus family at first glance.

Speaking at the launch, Ismet Suki, President of UMW Toyota Motor said, “Since the Lexus RX introduction in Malaysia, we have sold close to 1,100 units as at April 2012 and contributed to 32 percent of total Lexus sales in Malaysia.  This has made the RX as the most popular Lexus model and the Best Selling SUV in the Large Luxury SUV segment in Malaysia with a 35 percent market share.”

The new improved Lexus RX fits right into an active lifestyle with a sophisticated blend of the comfort in a luxury car with the driving pleasure of an SUV.

“The third generation Lexus RX was launched in Malaysia in March 2009 as a single variant, the Lexus RX350. Since then, the range has grown with the addition of the Lexus RX270 and Lexus RX450h. Together the trio represents a complete model range for individual needs of each customer,” added Ismet Suki.

For the exterior, aside from the new spindle grille, the new improved Lexus RX gets a new front bumper that gives it a sportier appearance. The lights are equipped with new LED Daytime Running Lights, which also adds yet another distinctive styling element.

Continuing the exterior changes is the new sporty 19 inch alloy-wheel design for the RX 350 and RX 450h to match the new grille. The new improved Lexus RX also gets redesigned rear light clusters that make the vehicle more distinctive on the road both day and night.

The interior has been refreshed and features a new steering wheel with high quality wood and leather. For the first time, all variants of the improved Lexus RX are equipped with Lexus’ award-winning, second generation Remote Touch Controller, which allows the driver to operate the various systems without having to reach forward to press switches or buttons and increases safety by reducing the need to look away from the road. The controller is linked to an 8.0-inch Electro Multi Vision screen and is equipped with navigation.

Speaking about the new Lexus RX350 F SPORT, Ismet Suki said, “The Lexus RX 350 F SPORT is the sportiest RX variant Lexus has ever made. It has been equipped with various performance-oriented parts to provide high safety driving for Lexus customers”.

Among the changes of the RX 350 F SPORT are performance dampers and F SPORT suspension, which gives firmer body control and better high-speed stability. There is also F SPORT specific exterior trim, which comprises of a mesh grille, dark grey 10-spoke 19-inch alloy wheels and F SPORT badges on the front fenders.  These changes lend an unmistakable sporty appearance to the Lexus RX 350 F SPORT and mark it out as a vehicle for true performance enthusiasts.

The interior has also been specifically design to give a sportier ambience with the use of aluminium panels in place of the more elegant wood inserts. The seats are trimmed with special F SPORT perforated leather and the 6-speed automatic gearbox gains paddle shifters thus offering even more direct control over the gears.

“I am confident that the new Lexus RX 350 F SPORT together with the Lexus RX270, Lexus RX350 and  Lexus RX450h will continue to appeal to its core group of customers as well as attract new customers to experience the Lexus brand”, added En. Ismet.

The sporty new appearance and the comfortable plush interior of the new improved Lexus RX are matched to the engines that it uses. The RX270 is powered by a 2.7-liter 4-cylinder engine that produces 185bhp and 252Nm of torque. The RX350 and RX350 F SPORT is equipped with a 3.5-liter V6 engine that provides an impressive 274hp and 346Nm of torque while the range topping RX450h uses a revolutionary Atkinson Cycle 3.5-litre V6 engine with two separate electric motors for a combined output of 295bhp.

Order taking of the new improved Lexus RX started on the 2nd May 2012 and Lexus Malaysia is confident to sell more than 400 units this year.