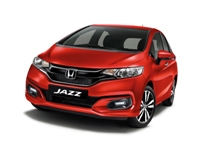 Petaling Jaya, 8 July 2019 – Honda Malaysia announced that it has recorded total sales of more than 44,200 registered units for the first half of 2019 (January to June), with the month of May recording the highest sales of more than 10,500 units. Based on this latest sales results, Honda Malaysia maintains its leadership position as No.1* in Non-National segment and No.2* in overall Total Industry Volume (TIV) for the first half of 2019, which has contributed 15.3%* to the TIV.

“I want to take this opportunity to thank all Malaysians for their continuous support and trust in the Honda brand. The first half of 2019 has been challenging but encouraging for us. The Civic reached a milestone of 130,000th units sold while the Jazz delivered the 100,000th unit to its owner,” said managing director and CEO, Toichi Ishiyama.

“It has been a very exciting few weeks for me since I took office. I am impressed with the strong commitment and dedication of the team to bring Honda to greater heights in Malaysia. This has given me the confidence that we are able to take on the challenge to push our sales even further,” said newly appointed president and COO, Sarly Adle Sarkum.

In reviewing the sales performance by model, the biggest contributor in the first half of the year is the City, which is the most sought-after model in the B-segment, contributing 34% to the overall sales. The next best seller for Honda Malaysia is the HR-V, which was launched in January this year, achieving 20% of total sales, followed by the CR-V which made up 14% of total sales. Honda models namely the Jazz, City, Civic, HR-V, CR-V and BR-V continue to lead in their respective segments**.

The HR-V was recently introduced with Passion Red Pearl colour, which received positive response from the market. The same colour was then introduced to the Jazz, City, CR-V and BR-V as well. Overall, the Passion Red Pearl colour has emerged as an extremely popular colour of choice amongst Malaysians. The current waiting period for all Honda models is between one to two months.