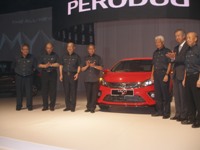 “EEV cars forms 47% of the market presently and this is in-line with our policy of creating a cleaner environment,” Dato’ Sri Mustapa.

“Perodua had made a total investment of RM6.2 billion and of this, RM800 million was in the R&D,” he added.

“The 24-year relationship between Perodua and DMC is very healthy as since 2005 more than 1 million units had been sold.

“We just received news that all the variants of this Myvi have received 5-star Asean NCAP rating and up till earlier this afternoon, we have received 5,000 bookings,” said Datuk Aminar.

“Since the introduction of GST, the approval of loan applications has gone down from 70% to about 47-48% and we are studying the possibility of setting-up a ‘credit house’, he responded in reply to our question.

One of the key features introduced is the 4-function Advanced Safety Assist, a first in a model in this segment.