Sin Hock Soon takes Shell FuelSave Diesel for a test drive. It delivered. Since young, Tony Yew has been ambitious. He never settled for what he had, and that determination made Sin Hock Soon Transport Sdn Bhd, industrial transport and logistics provider, into the success it is today. So when it came to his business’ fuel partner, he expected no less.

In 2015, Sin Hock Soon started to use Shell FuelSave Diesel as their main fuel supply, right after Yew tested its claims of better fuel efficiency and cleaner engines.

TAKING MATTERS INTO HIS OWN HANDS

Yew had been looking for more ways to further his business, and found that his operations were suffering due to vehicle performance. “More than ten units were breaking down every month or so. The injectors were badly burnt and jammed with deposits.” Investigating the issue, Yew discovered an alarming difference when his vehicles used Shell FuelSave Diesel and when they did not.

“We have saved up to 6% on our maintenance costs since switching to Shell FuelSave Diesel.”

IN THE DRIVER’S SEAT OF FUEL EFFICIENCY
The result of 100 years of fuel research, Shell created a powerful detergent formula that helps prevent deposit build-up contributing to improved fuel economy over the lifetime of the vehicle. This same formula is used in Shell FuelSave Diesel, supplied in both skid tanks and retail stations. 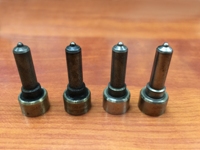 Unlike the rest, the injector on the far right used only Shell FuelSave Diesel and stayed clean from deposits.

Wanting further evidence, Yew put Shell FuelSave Diesel to trial. He monitored the engine parts of trucks that were either filled with Shell FuelSave Diesel or alternatives, and the results were clear. “The injectors we used with Shell diesel had no problems. In fact, it still looked like new. From experience, the injectors would have darkened with residue in a short period of three months.”

THE FAMILY BUSINESS JOINS SHELL’S FAMILY
All this solidified Yew’s decision to work with Shell moving forward. With plans to expand his transnational business across Vietnam, China and Singapore, Yew is confident that this collaboration will optimise their efforts. Sin Hock Soon stands as one of the largest service providers in Malaysia today, and has over 250 trucks of various capacities in their fleet.

Taking over the family business when they only had 40 trucks, Yew is now training the third generation, including the children of his siblings, so that all of them can be independent and carve their own successes. Start driving your business further with the fuel that works just as hard as you. Learn more about Shell FuelSave Diesel at www.shell.com.my

“Partnership is crucial for the success of a business, as it’s never only about yourself. That’s why I’ve chosen Shell, and believe they’ll help bring my business further.”

The above views are those of a real Shell customer who has used Shell FuelSave and may have been edited for brevity or clarity. The customer was not paid for his/her testimonial. Results were self-reported by the customer and have not been individually verified. Results are not indicative future performance; individual savings may vary.