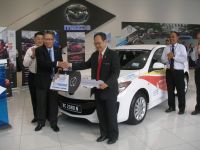 Shah Alam, 10 March 2016 – A smart partnership between the government and private sector is always welcome. A perfect of that is Bermaz Motor Sdn Bhd proudly sponsoring the ASEAN Skills Competition (ASC) 2016 with a total of 6 units of Mazda3. Four units of the Mazda3s’ will be used in ASC’s nationwide awareness campaign road show and two units will be used in the competition to assess the skills and aptitude of the finalists.

“A number of car brands will be used during the competition including Mazda, Proton and Toyota,” said Datuk Dr Pang Chau Leong, director general, Department of Skills Development, Ministry of Human Resources Malaysia.

“Bermaz is committed to improving the skills of our work force and this collaboration is an example of our determination,” Dato Sri Ben Yeoh, executive director, Bermaz Motor

The ASC 2016 promotes the development of 25 skills area in the ASEAN region and consequently at international level (WSC). The competition is held every two years and member countries take turns to host. This year we are the host and it is organized by the Department of Skills Development (Jabatan Pembangunan Kemahiran), Ministry of Human Resource (Kementerian Sumber Manusia) and Public Works Department (Kementerian Kerja Raya).

The event will be held from 23th to 28th September 2016 at Malaysia Agro Exposition Park Serdang (MAEPS) over a period of three days. Participating finalists come from neighbouring countries such as Indonesia, Malaysia, Philippines, Singapore, Thailand and Vietnam. The nine finalists’ of the Automobile Technology sector will be assessed based on five specific skill areas, as adopted from World Skills Competition (WSC) 2015. The skill areas tested are (i) Engine Management System, (ii) gearbox, (iii) steering, suspension & brake systems, (iv)engine overhauling and (v) body electrical system. Finalists will be assessed over duration of 3 days with a total of 15 hours (3 hours per skill areas).