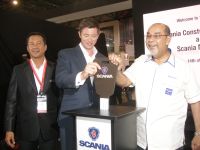 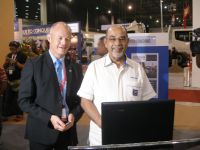 “I am pleased to be invited to this year’s MIBTC and wish to point-out that the logistics industry as of 2013, contributes 28% of the GDP or RM28 billion. This is expected to grow by RM1.2 billion annually” said Tan Sri Dato’ Seri Syed Hamid. 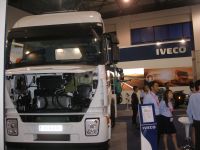 Scania used the expo to launch their Marcopolo complete coach and a versatile construction truck. This truck can be adapted to be a tipper, dumper, mixer, jinker and other applications.

“Our Marcopolo is a complete coach as previously to used to sell only the chassis and the size of this segment is about 1,500 units per year,” said Idros Puteh, sales director, Bus & Coach, Scania Southeast Asia. 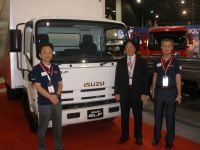 “This coach comes with the ‘late departure warning’ which monitors the driver’s driving habits and in the event there is any unusual, sudden change in direction, it alerts the driver,” he added.

“The 1,200 units per year construction truck segment is new to us and we are launching this truck due to the rapid growth in the infrastructure & construction industry,” said Roslan Effendi, sales director, truck & engine, Scania Southeast Asia. 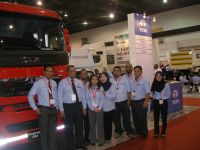 Volvo Malaysia launched their fleet management system, Dynafleet which is a telematics solution that can streamline the planning and execution of transport assignments. It includes a large variety of functions grouped together into three services: Fuel & Environment, Positioning and Messaging. The various services are offered either individually or in any choice of combination and can be easily integrated with the customer’s existing administrative systems.

“We are proud to unveil that since its inception, more than 90,000 trucks worldwide have installed the Volvo Dynafleet system and over the years, we have fine-tuned the systems,” said Mats Nilsson, managing director, Volvo Malaysia.

“Dynafleet can also be installed in other European truck brands which conform to the fleet management standard,” said Stephan Alveflo, telematics manager, Volvo Trucks, Asia Oceania, in reply to our question.

MIBTC will be held until 16 May 2015 and for the whole duration, the Scania Driver Competition (SDC) special edition will also be conducted.